Today was a DNA day. That is to say, I tried to take some time and go back through various DNA matches; today I looked at my half-sister Glennis’ Ancestry results.

On Ancestry DNA her closest match is, of course, me sharing 1977cM of DNA.  Next is newly discovered half-aunt, Aunt Phyllis (See OMG – Another Half-Sibling).

Her next closest match is D.W. I’m not sure who that is or how that person fits in, so I emailed her administrator.

Next is C.D. the daughter of Aunt Phyllis, a newly discovered half first cousin.

J.M. appears next on her list. I don’t know who that is either, but she is related to me as well as Glennis so we know it is on our mom’s side. I messaged her too.

2nd cousin T.L. is next on the list; she is a descendant of Cora Brown, my grandfather’s sister.

Next was R.B. He is a new match on Ancestry DNA, there is a blue ball next to his name. I did the “Shared Matches tab and found he was not a match to me or anyone else on my mother’s line. I thought, “Oh my,” and with another click I learned that he and Glennis share 271 centimorgans of DNA – Enough to be second cousins. R.B. is Glennis’ closest match on her paternal side. That’s something to get excited about, and I did – almost giddy in my excitement. Although he didn’t place himself on a tree, he did have a tree on Ancestry. Assuming that he was the home person, I learned found his great-grandparents were on my notional tree as well.

I’ve contacted R.B.; hopefully, he will respond quickly (He last logged into Ancestry on Feb 25th). In any event, I have a new area to focus my research on my Peterson Paternal Project – The descendants of John Huber (1872-1946) and his wife Viola Cline (1879-1953). I suspect they just might be Glennis’ great-grandparents. 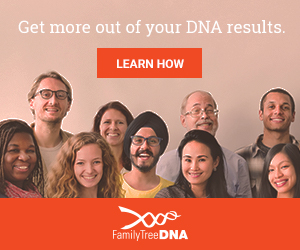 It began with an email from (I’ll call her) HC, who indicated that Ancestry DNA was saying that she and I were first or second cousins. The Ancestry match reported that she and I share 460cM of material.  A look at our trees showed no surnames in common. Ancestry allows you to view a match and see who also shares that match.  My half-sister, Glennis, was also a match and shares, even more, DNA (522 centimorgans) than I share with HC.  That proves that the match was on my maternal side as Glennis and I share a common mother.

Through an exchange of messages, I learned that HC’s mother was adopted, was born in May of 1938 in Texas, however, her mother was conceived in Minnesota. That narrowed things considerably.  My mom’s Montran/Barber line pretty much was from Michigan; my mom’s Brown/Manning line was from Minnesota. So, it was very likely that the match came from my mother’s father’s side of the family.  Luckily, my mother has a half-sister.  The bad news is that neither my mother or her half-sister, Barbara, tested with Ancestry.

HC uploaded her data to GEDMatch and the results were amazing.  She shares over 1000 centimorgans of DNA with BOTH my mother and my aunt Barbara – Proof that the common line is on the Brown side. I like to use The DNA Geek’s chart to quickly see the potential relationships between individuals at a particular centimorgans level. The chart shows that 1000 cM is solidly in the range of Group C relatives. Relationships for Group C include First Cousin, Half Aunt-Uncle/Niece-Nephew, Great-Grand Parent/Child and Great Aunt-Uncle/Niece-Nephew.

Now that I know that the match is on the Brown line I can speculate.

Finally, I questioned was there is a locational opportunity for Grandpa Dick to be the father. HC’s mother was conceived while her mother was in Deerwood, MN about August of 1938. In 1937, my Grandpa Dick was living in Brainerd, Minnesota, about 18 miles from Deerwood.

I think that is enough to prove the relationship. However, I always like to go the extra mile if possible and prove it beyond the shadow of a doubt. HC’s mother is still alive and recently had her DNA tested. When the results come back, we can confirm this relationship. I expect that the autosomal DNA match with my mother and with Aunt Barbara will be in the 2000cM range – solidly in the half-sibling range.

My mother and my Aunt Barbara have a here-to-for completely unknown half-sister. Amazing. I always heard that Grandpa Dick “liked the ladies.”  I guess he did. I now know of four daughters that he fathered, my mom, Aunt Barbara, Aunt Mary Lou, and newly found Aunt Phyllis. I wonder if there are more….