There are very few things in genealogical research as exciting as finding a photograph, painting, or drawing of an ancestor. I was researching David Swayze, one of my wife’s third great grandparents. I was excited.  I saw where several people have attached the image to David Swayze (b. 1796). I also saw where someone attached the same photo to another David Swayze (born in the 1600s.) From the clothing the individual in the photo is wearing, it is clear that the photo/ isn’t from the 1600s.  Then I thought about whether this is really an image of my David Swayze. David’s uncle was Judge David Swayze. My thoughts immediately went to the two Davids and how the two could be uniquely identified in a photograph.  I looked through all the sources for this photo I could find and none of the sources appeared to have any provenance or history with the on-line version of the photo. I have emailed the two individuals that seem to have the first postings of the photo to see if they have any provenance about the photo and/or how they differentiated Judge David Swayze (1762-1838) from David Swayze (1796-1850) – Or David C. Swayze, born circa 1840, for that matter.  (I think I know but I don’t want to assume anything.)
My thought is, don’t assume that a photo that is purported to be a particular individual is that individual without provenance or, at least, some kind of identifier information.
DH50 – David  Swayze
10 June 1796 – 25 September 1850
David  Swayze[i] was born on 10 June 1796 in Morris County, New Jersey[ii]; he died on 25 September 1850 in Kalamazoo, Michigan, aged 54[iii]. He was buried on 29 September 1850 in Kalamazoo at the Mountain Home Cemetery[iv].
He is the first son (second child) of Amos Swayze (1767-1839), aged 29, and Henrietta Chrisfield.

It appears that he may have had an older sister, Cornelia. Her birth date is unknown.

David was one of the founders of Kalamazoo, Michigan. Although his life in Kalamazoo was short, only about 10 years, his impact was felt in many societies, organizations, and village life.

Between 1841 and 1844 he was the Treasurer of the Kalamazoo County Bible Society,[viii]

In 1844 he was a Member of the Kalamazoo Clay Club. That was a Whig organization that supported Henry Clay for president.,[ix] Also in 1844, he was a Trustee for the incorporation of Kalamazoo.,[x]

In 1846 he service the city as the “Overseer of the Poor” for the Village of Kalamazoo,[xi]

His interest in the Kalamazoo County Bible Society continued into 1850 when he was Vice President.,[xii]

David Swayzee died 25 September 1850 in Kalamazoo, Michigan. He is buried at Mountain Home Cemetery in Kalamazoo.

[Note: Names in italac are anticipated but haven’t been confirmed by me, yet.]

Review Wiseman Family at the Old Church at New Salem for references to David Swayze. ( This book is available on Persi at the Library persi.heritagequestonline.com.)

Tracing women in early 19th century history can often be a difficult process. Women often didn’t exist except in the context of their wifely status. Such is the case of Sally Ann (unknown) Darling.  She is only mentioned in a couple documents that I have found, so far. I first encountered her name when I found the obituary of her son, Rufus Holton Darling, which mentioned that he is the son of Abner and Sally Darling. I also traced her husband, Abner Darling. That search yielded his will, which made Sally Ann the executrix.  It mentions nothing other than her name. It doesn’t even mention the names of their children.  In court, men attested to the validity of the will and it doesn’t appear that she ever addressed the court. The 1840 Census shows that Rufus H Darling is living at the same location (based on neighbors) that Abner Darling lived at before. Living with him was an older woman that I presume is Rufus’s mother – Abner’s wife – Sally Ann. Sadly, that is about the extent of what I have learned about Sally Ann.

·      I am further researching for Rufus Holton Darling’s siblings.  Hopefully, results of that search will provide additional information or clues regarding Sally Ann.
·      Third cousins on the Darling DNA profile would share Abner and Sally Ann as common ancestors to my mother-in-law.  Following clues there may help open this new brick wall.

Finding individuals before the 1850 Census is always problematic. I find the process to be an iterative process, that is to say, it is necessary to go through the same records several times until you find the right connections. Here is my process for finding Abner and Sally Darling. As is always the case, start with what you know (or think you know).

According to the Kalamazoo Gazette, Rufus Holton Darling was the son of Abner & Sally Darling. He had come to Kalamazoo from Rome, Oneida Co., NY in 1840.[i] This article is about searching for Rufus in Oneida County and the search for his parents, Abner and Sally Darling.

A search of the 1830 Census yields seven Darling’s listed. Again, no Abner. I wouldn’t expect the then 14-year-old Rufus to be enumerated, but rather be in another household.

1820 – Abner Darling – Paris, Oneida, New York[iv]
M Under 10   3
M 10-15         1
M 26-44         1
F Under 10    1
F 10-15          2
F 26-44          1
Persons engaged in Agriculture: 1
This likely shows a simple farm family with two adults and seven children under 16.
The good news is that Rufus could be one of these three males under 10. The bad news is that it is not Rome.  Paris is a small town about 17 miles southeast of Rome. However, Paris is only about ten miles south of Utica, so I would expect that people from Paris would associate themselves with Utica and not Rome. Abner Darling of Paris doesn’t show in the 1830 census gives rise to my speculation that Abner Darling of Paris either died or moved sometime between 1820 and 1830. I think I’ll use that as a hypothesis and continue on.
Returning to the 1830 Census, sadly none of the entries for Darlings in Oneida County are in Paris. So, it appears that Abner either died without his heirs continuing on the property or that Abner moved.
The Abner of Paris in the 1820 Census closest census (three on each side) neighbors were: Henry F West, James Eastman, David Pixby (?), John Ramsdale, Solomon Stockwell, and Joseph Ballou. I decided to see if they show in the 1930 Census.

The Will of Abner Darling

At this point, I was kind of stuck. Then I looked at the wills and probate records on Ancestry.Com. It is a fantastic resource. I quickly found the Will of Abner Darling who died in 1839 who gave everything to his wife Sally. Could this be the same Abner and Sally Darling who were the parents of Rufus Holton Darling?

I thought I’d take a look at the 1840 Census. Sally would, most likely, still be in Clarkson only a year later. A search yielded a huge find. Rufus H Darling was the head of a household in Clarkson.

Then I went back to the 1830 Census and found an Abner Durling living in Clarkson, Monroe County, New York.
1830 Census – Abner Darling – Clarkson, Monroe, New York[vi]
Everything appears to fit my expectations for the Abner Darling family as I would expect it to be in 1830.
The will of Abner Darling provided the break that allowed me to think outside of the Rome, Oneida County box. I now believe that Rufus Holton Darling was born near Rome, New York. When he was a child from 5 to 15 years old, the family moved to Clarkson, New York (about 20 miles west of Rochester).  In 1839, his father passed and the 25-year-old Rufus became the head of the household. In late 1840, Rufus located to Kalamazoo, Michigan.
Solving family history by using the pre-1850 censuses can be difficult and complex. There are seldom easy answers, but through perseverance, a viable conclusion can be reached. Now to sort out Abner in the 1810 Census.  There are five Darling families in Oneida County during the 1810 Census.  One of them is “A. Darling.” The eldest in that enumerated family is over 45 years old. Too old to be our Abner. But there is a 16 to 25-year-old male in that enumeration who could be our Abner.  Another fine investigation to undertake….

Great-great grandfather Rufus Holton Darling’s father’s name was Abner and his mother’s name was Sally. Although I am not totally convinced, I am fairly certain that this “Record of Will” refers to Rufus’s father Abner. It also helps explain why Rufus would have left New York for Michigan in 1840. At Abner’s death, Rufus would have been 24 years old.

Abstract of Will (Abstracted by Don Taylor)

Information that I found.
8 January 1839 – Abner Darling of Clarkson, Monroe County, New York was alive to sign his last will and testament.
He made his wife, Sally Ann Darling the Executrix of his will.
He gave everything to his wife, Sally Ann Darling.
He wants his debts paid.
He has pending litigation against Nathan Mott & Ansel Frost.
His wife should take care of his minor children including educating them.

First I make & Constitute my beloved wife Sally Ann Darling sole executrix of this my will. Second. I give & bequeath to my said wife all my goods and chattels land & tenements & all my estate both nal [real] & personal of which I may die seized or possesed or whether in fasision or in action to have & to hold the same to her own use – forever, Third, It is my will that all my just debts be paid & in as much as the ability of my said executrix to pay the same will depend on the determination of a suit now defending in the Court of Chancery against Nathan Mott & Ansel Frost it is my will & desire that said suit be prosecuted with all diligence to a determination & that my said executrix shall perform whatever shall be nessary & proper to perform whatever deorse may be made therein trusting in consequents of the Justice of the cause that she will thereby nalise the means of paying my debts, And it is my request & desire that my said executrix will in her discretion & according to her means maintain and educate such of my children as are minors they aiding and assisting therein & that at or before her decease she will if need be make such bequest or other arrangement that what may remain of my property after her decrease may be equally divided among all my children. In witness whereof I have hereunto set my hand & seal this eighth day of January 1839.

Signed sealed published and delivered by the said Abner Darling to be his last will & testament in the presence of us & who in his presence have subscribed our names as witnesses all residing in Clarkson.

Today is a great day to remember “Uncle” Frank Huseman; he would be 100 years old today if he were still living. He wasn’t really an uncle to my wife, rather he was the husband of a first cousin twice removed. My wife recalls, 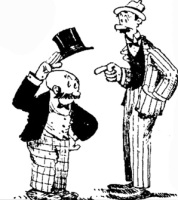 “We didn’t see Uncle Frank Huseman very often, but I remember him as a tall man with a bushy mustache. Looking back, he reminds me of  the old cartoon character,  Mutt, when standing next to [Grand] Uncle Frank Kemon, who appeared to be his Jeff. I remember him as being a quiet man. He passed when I was a teenager, so my memories are that of a child.”

“Uncle Frank Huseman worked as a commercial artist, but I don’t recall much else. He and Aunt Katherine used to spend time in Woodstock, N.Y. In the summers, which was an artist colony before it gained fame as the location of the music festival in 1969. Around that time, he made a stained glass peace symbol for me as a Christmas gift. I still have it  and it’s hanging in my studio window, and I always think of him when I look at it.”