This week, for Photo Friday, I’m reviewing four photos, one child, two women photos, and one small photo with two women in it.

This photo kind of has two backs. There is the original small 2-3/4” x 2” black & white (pictured above). Also, there is a blue-tinted printed copy of that same photo but only has the left inch, thus leaving out the daughter. However, the backs of the two are slightly different. One says, “Mrs. Carrie Johnson & daughter Lillie,” the other states, “Carrie Johnson Mrs. R. M. Johnson.”

A search for Carrie Johnson, with a spouse of R. M. and a child named Lillie, immediately found a 1910 Census record with Richard M. Johnson, head of household, Carrie E. Johnson, his wife, and Lillie R. Johnson, as a daughter. In 1910 they lived in Hallowell, Kennebec County, Maine.

The back of the photo says, “Kenneth F Bartlett.”  The picture is by “Smith Photo Co, 27 Monument Sq., Portland, ME.”

There was a Kenneth F. Bartlett, born in Scarborough, ME, on 30 June 1905, the son of Ferdinand M. and Ruth E. Bartlett.

A review of potential other Kenneth Bartletts did not yield any other candidates.

The child appears to be between ½ to 1-1/2, and the photo style is consistent with approximately 1906. So, I believe this to be Kenneth Bartlett.

The back of the photo says, “Evelyn Ardelia Bragdon”  The image is by the “Marshall Studio, Westbrook, ME.”

I have seen photos of Elsie and Evelyn Bragdon previously. A view of Evelyn on Family Search yielded another image of the same picture, so I did not upload my copy of the photo to Family Search.

The back of the photo says, “Elsie Bragdon – Westbrook High School – 1919.”  The picture is by “Fenley, Portland, Maine.”

A search found that an Elsie L. Bragdon lived in Westbrook during the 1920 Census. I am confident this is the correct person.

It is a great day when you can identify all of the individuals in the photos you are reviewing.  I am caught up on my Photo Identification Project, so it will be a while before I research any others.

Very good week for my Photo Identification Project. Five photos, eight people, and all but one identified, and I have her (very common) name.

There was a Moody B Lovell, born 1854 and died 29 January 1902 in Portland, Maine. His parents were Henry and Artemisia (Merriman) Lovell.

The back of the photo says, “Walter Blaisdell – No. Berwick, Maine.”  There is no studio identified.

There was a Walter Blaisdell who was born 5 November 1890 in Chelsea, MA, but lived in North Berwick during the 1910, 1920 and 1930 Censuses. He married Nelda Naismith on 1 September 1925. It appears that this photo is of that Walter Blaisdell.

There was another Walter Blaisdell who was born 11 May 1879 in New Hampshire and lived in Berwick in 1920. However, all of his information appears that he lived in Berwick and not North Berwick.

The back of the photo says, “Wm Huntington, Age 17 – Lottie May, Age 15, – Lillie Richardson, Age 10 – Carrie Ella, Age 12 – June 1900.” Although there is a photographer’s name on the print, I can’t make the name out, however, with close examination I could tell the location was “Augusta, ME.” 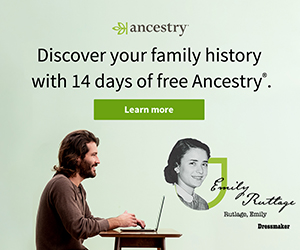 Even though I didn’t have a surname for this family group, I was pretty sure I’d be able to identify who they are. A look at FamilySearch was not successful for me. However, Ancestry.Com provides more sophisticated search capabilities. There, I quickly found William H Johnson, son of Richard and Carrie Johnson. William had three sisters, Lottie M., Carrie E., and Lillie R. They Lived in Hollowell, Kennebec County, Maine, which adjoins Augusta. No doubt this is them.

The back of the photo says, “Rose Anne McLaughlin.”  The photo is a cabinet card by “H.M. Smith Studio, 478 Congress St., Portland, ME.”

There are at least seven individuals that this photo could be an image of.

Rosa 1844 – There was a Rosa McLaughlin, born about 1844, and the apparent wife of James McLaughlin who lived in Portland during 1870.

Annie 1850 – There was an Annie McLaughlin who lived in the John McLaughlin in Portland in 1870.

Annie 1863 – There was an Annie McLaughlin, born in Ireland, 1863. In 1880 she was living in Portland, Maine, as a servant in the household of Clarence Cheeney.

Annie 1866 – There was an Annie McLaughlin, apparent daughter of Margaret McLaughlin, living in Portland during 1870.

Annie 1871 – There was an Annie McLaughlin, born in Maine in 1871 and lived in Portland with her parents, William and Jane McLaughlin in 1880.

Because the date is unknow and could have been taken any time between 1870 and 1910, I am unable to determine which of the many individuals this may be.

If you are related to any of these individuals, or can help identify Rose Anne McLaughlin, I’d love to hear from you.