Sometimes it is necessary to go back to the drawing board.
My records on my 2nd great-grandparents are abysmal.  I have a couple documents.  One is a paragraph titled, “Family History” and in the corner is written “oral history.”
Of course, it doesn’t have anything about who said it or when.  It is fairly old, it might go back to the 1970s, probably the 1980’s, although I’m not sure.  The second document
is is a copy of a sheet titled “Family History Carter County – KY. “
It is more of a chart than prose about the family.  I don’t know where it came from either but I think it probably came from about the same time.  Maybe it will become evident when I go back though all of the resources that I have on Joe (John) Mannin, his wife Eliza
Jane Fannin, and the rest of the Mannin clan.

There are a number of bits of information in this document that I am sure are not true.  Once you find one certain error the rest become questionable.  We know that Joe (John) William Mannin, the son of Enoch Mannin, fought for the Union.

[i] that is John William Mannin’s Volunteer Enlistment. What is really great about the document is that John was only 17 years old when he enlisted and his father, Enoch, gave his consent.  The names, places,  and dates are all spot on. Enoch also enlisted on the same date.

indicated that that she is 99.8% European.

Now, I know that because of the “stickiness” of DNA through the
generations it is fairly possible that the Native American segments were
lost.  However,  none of the cousins (descended from Minerva) I have been in contact with that have had DNA testing with have any Native American either. Because of this, I find that Minerva being full Cherokee as being native unlikely. Additionally, Minerva is never reported in any of the Census reports as being “Indian.”  Finally, I have not been able to find a Charlie Mannin as a brother of Joe in any of the census reports or other
documents.  Possibly “Charlie” was a cousin or other relative and was considered like “a brother.”

Much of the other material is accurate, but because I know several of the “facts” are incorrect, I am loathe to accept any of it.

The other document I have regarding “Family History Carter County – KY” is easy to read. It says: 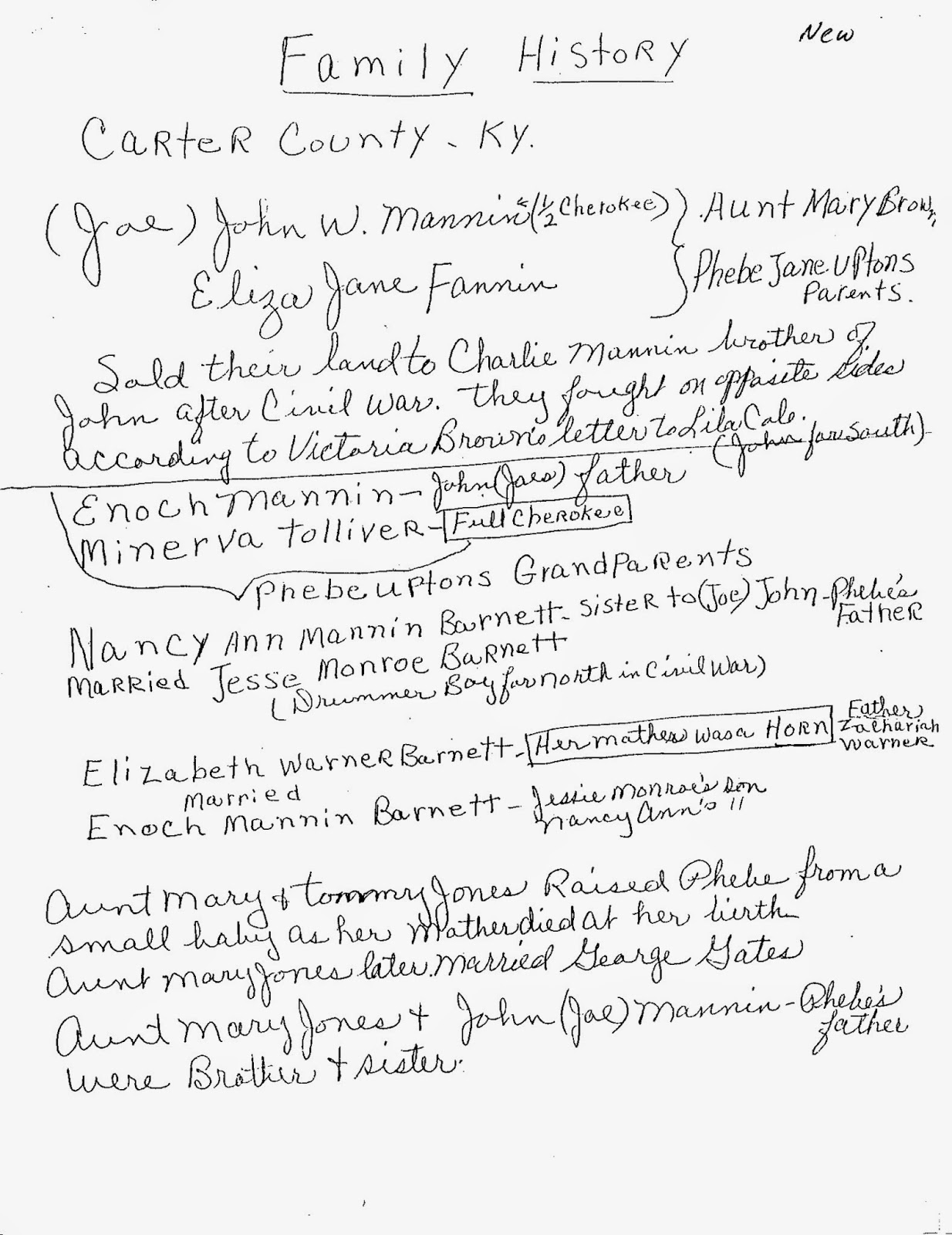 It is fairly clear that this
document and the other document had different authors, however, both documents
contain some of the same information. What this does do is solidify what we
believe to be family history (oral).  I
have little doubt the family believed Joe (John) fought for the South and that
they believed that Minerva was Cherokee.
I have about an inch of materials,
documents, that I need to go through (including a transcript of the letter from
Victoria Brown), catalog the sources where I can, and incorporate the
information into my tree. We will see if anything about John and Eliza becomes clarified as wade through the information.So, here is what I think I know about Eliza Jane Fannin.

She was born about 1861 in
Kentucky.[ii]
She married John Mannin probably
about 1875,
She had two children, Mary
Elizabeth was born in 1876, although it could have been 1877.
In 1880 she lived in Pine Grove, Rowan
County, Kentucky with her husband and daughter Mary.[iii] [Note: Rowan and Carter counties adjoin.]
She died December 1881 or December
1882, probably in Carter County Kentucky, giving birth to her second child
Phebe.

Although I know very little about my 2nd great grandmother, Eliza Jane Fannin.List of Greats

I am sorry that I messed writing
about David Swayze (Week 23) and Marion Sanford (Week 24). Due to my moving
from Georgia to Maine and due to a computer hard disk crash (which left me
computerless for 27 days), I was unable to write the past two weeks. I hope to be able to catch back up with them later.
Next week I plan to write about
Rufus Harry Darling, my wife’s great grandfather.
[i] www.fold3.com/image/#232425255
NARA M397. Compiled service records of volunteer Union soldiers who served in
organizations…
[ii] 1880 Census – Place: Pine Grove, Rowan, Kentucky; Roll: 441; Family History Film: 1254441;
Page: 453B; Enumeration District: 114; Image: 0110
[iii]
ibid.